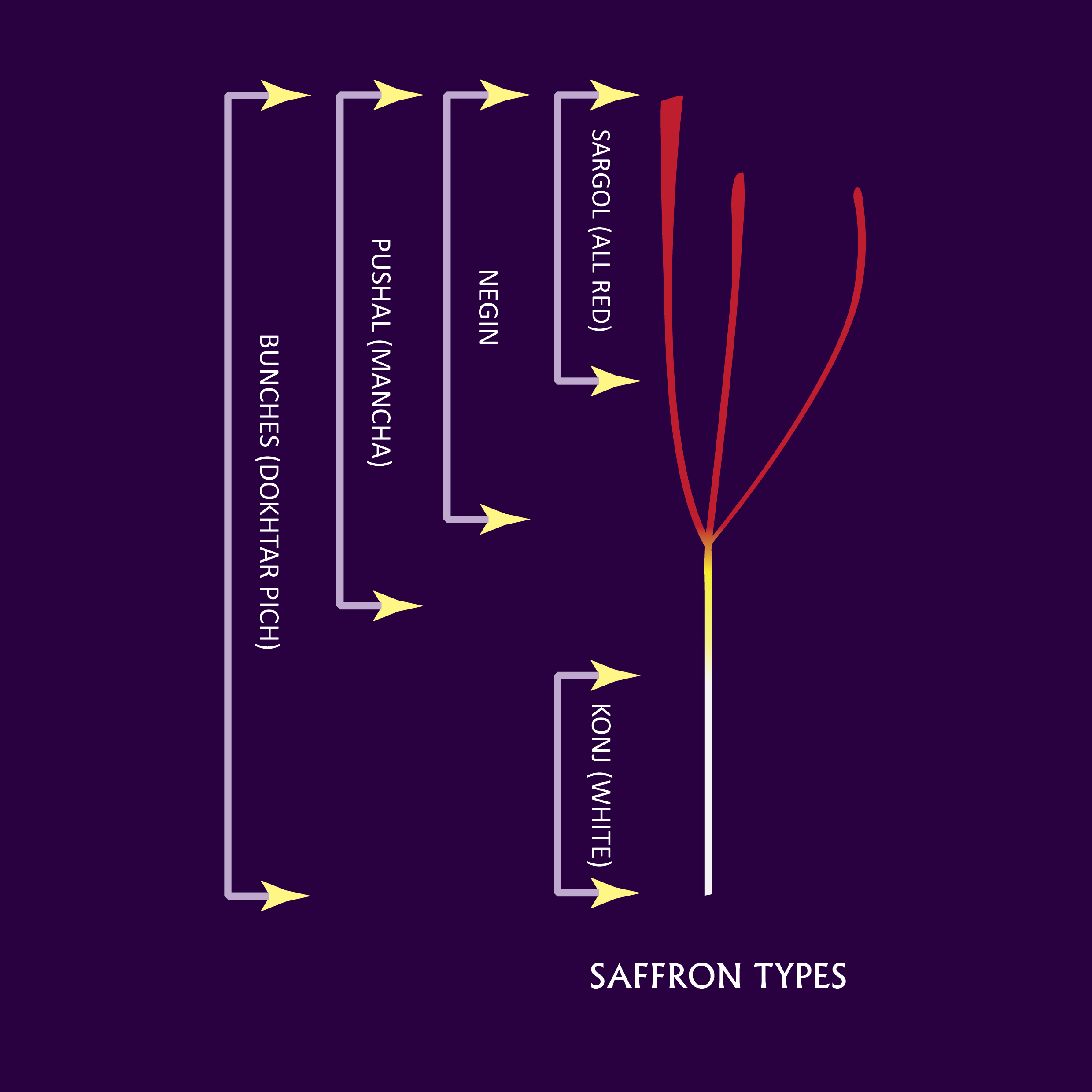 In Iran, saffron is categorized into five general groups: Sargol, Negin, Pushal, Dokhtar Pich, Konj. All these names are coming from Persian language and depicted in following illustration.

In England, saffron is graded based on qualities such as color, adore and taste. The difference between the two above categories is due to the difference in production and consumption. At the same time, the ISO3632 standard has introduced the most prestigious grade accepted by all producing and consuming countries of saffron. The following saffron types are more famous and well-known at the international markets.

If the saffron style is separated from the flower, then the stigmas will have 1-3 millimeters of style, which will be called Pushal. Grade 1, Grade 2 and Grade 3 saffron are in this group.

The coloring rate of Pushal is about 170 to 250 degrees. Some consumers are more likely to prefer this type of saffron in terms of connecting stigmas to style, indicating the quality of the saffron.

In this type of saffron, the three strings of the stigma are longer , which makes the strands of the stigma to be collar and look prettier and have more volume. Accordingly, this kind of saffron is more customer-friendly than other species, resulting in higher price of it.

The coloring rate of Negin saffron is between 230 and 270 degrees.

Sargol (All red) or Coupe Saffron

From among other species of saffron, one should pointed out to Sargol saffron, which is considered to be the most qualified saffron. This saffron does not contain any parts of the style, and is the same as the type known as “red” in the world and is similar to saffron Coupe.

The coloring of Sargol saffron is between 210 and 260 degrees.

In Iran, the produced saffron is divided into several categories. One of the oldest terms is the term Bunches (Dokhtar Pich). This kind of saffron, which is made of stigmas and style, is referred to as bunches in international market. In this type of saffron, the red stigma should cover 70 to 75 percent of the entire strand.

This type of saffron contains stigma plus 4-5 mm of raw material. The strands are graded as single-stranded and double-stranded form. In the former, the styles and the stigmas are placed on one another. However, in the later, it is tried to put the stigmas on both sides and the styles in the middle on each other. In this form, when the style is in the middle, the stigma becomes more significant. In the meantime, because bunching is done by girls, the two forms are called “Dokhtar Pich” (means bunched by girls).

The coloring power ofDokhtar Pich (Bunch) saffron is between 120 and 150 degrees.

When we cut the red part (stigma) from the bunch, the root or white part called white saffron or Konj in Iran, remains which cannot be considered saffron. This part is known as white or cream in Europe.

White saffron is not included in the categories of saffron. In contrast to what many believe, Konj has a greater aroma than Sargol. It should be noted that scientific studies and analyzes show that valuable contents are only found in the saffron red stigma.

These material, especially the crocin (saffron color factor), have been transferred from the stigma to the style due to the movement of the plant tissue. However, due to the moisture content of the style, it seems that the aroma of the style is high. At the same time, it is favored due to its beautiful appearance and its eye-catching color, and impossibility of counterfeit.

How To Recognize Pure Saffron From Fake Saffron?

Some Use Full Information About Saffron